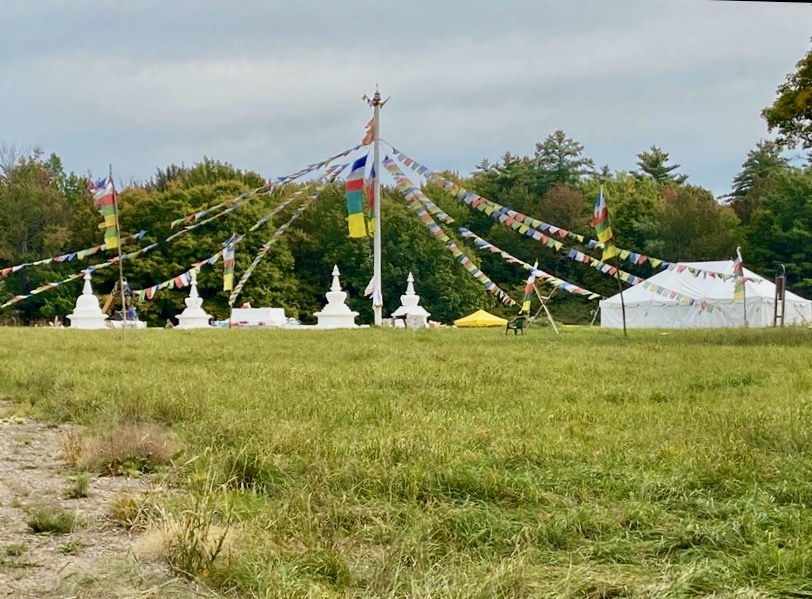 In a little over a week, a new Stupa Garden has been erected at Padma Samye Ling!

Ven. Khenpo Rinpoche and his brother, Ven. Khenchen Palden Sherab Rinpoche, had planned for years to build a stupa garden in the lower meadow at our Catskills monastery and retreat center. The carved stone blocks arrived from Indonesia this year, but assembling these massive pieces required special equipment and skills.

Through the generosity of a sangha friend, a talented crew who usually work on installations of monumental sculptures arrived the last week of September. Eight days later, the stupas are built!

Members of the PSL community and Dharma Skills Program pitched in and worked alongside the sculpture artists. Lama Lorraine, with Lama Laia and Lama Dragpa, led a group who worked long, hard hours to prepare treasures from all over the world that are now stored inside the stupas. Khenpo Rinpoche oversaw the entire project, and was very happy with the results.

Here is a collection of photos and short videos to help give a sense of the work. Sangha members and friends from around the world helped make this a reality through prayer and donations, so it is only right that everyone be able to participate a little in the event.